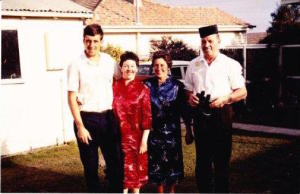 REASONS FOR LEAVING OUR HOMELAND:

Robert’s great, great, grandfather William was born in 1783 and became, like other generations of Scarletts way back to 1610, a tenant farmer in County Fermanagh Ireland on land no bigger than 1/8 of an acre.

Maisie’s great, great, great grandparents married in the little Parish Church of Tieraclea near the Shannon Estuary in County Kerry on 6th January 1788, twenty days before Captain Arthur Phillip landed in Sydney Cove to proclaim Australia a Colony of England and set up the first white settlement. Her family were cottiers subsistence agricultural labourers working in lieu of wages to pay the rent for a one room dwelling and a small patch of land on which to grow potatoes.

In 1952, after two world wars in Europe; losing a brother in a submarine in 1940; having his parent’s home bombed 1944; having his own ship blown up in Oostende Harbour Belgium in 1945 along with 23 other MTBs with a huge loss of life – the only choice, along with two other sailors, being the uncertainty of having to walk through war ravaged Germany and France to get a British ship home to England; 12 years loyal service in the Royal Navy and being demobbed to a war weary and economically bankrupt country with no hope in the foreseeable future of him ever owning his own home and giving his children the education he never had that, my Dad took the heart wrenching decision to migrate to Australia leaving extended family behind with no hope at that time of ever returning for a visit to loved ones.

So it was on May 29th that my brother John – then five – and myself – nearly 10 years old – with my Mum and Dad sailed out of Southampton Harbour on the former troop ship, the HMT Asturias, on a sunny day along with my Nan, Prim Scarlett, a widow after my grandad Bob died from TB five years earlier. A plumber / boilermaker who had worked on the Titanic and Olympic in the great ship building yard of Harland and Wolff in Belfast.

My dad’s brother had migrated to Tasmania two years previously and would meet us upon our arrival in our chosen destination city of Melbourne.

I was old enough to feel the stress my parents were under in the weeks and days leading up to our departure. Furniture going to the auctioneer – many treasured items being left behind – and early on the morning of departure Dad hiring a handcart to take our beds to the auction house and Dad then rushing down to his mum’s taking her last remaining bits of furniture there too. Then all of us saying goodbye to family and friends at the Rockferry Railway Station. My mum was never to see her own mother again.

But when we set sail from Southampton, over time a calm descended on my parents and an excitement gradually began to creep into our everyday life on board ship. My dad especially enjoyed life at sea again after all those years in the navy. Mum with no more food ration coupons to worry about or daily home duties relaxed into being looked after. And us kids, well, dad, even though he had to leave school at 12 years of age, had sailed around the world and told us many stories of countries we were passing; places he had visited in peacetime; seas we were sailing through and countries we would visit. We watched flying fish racing the ship in the Mediterranean Sea; the fun all the children had of participating in activities organized by the crew like being hosed on deck when we got closer to hotter climes and crossing the equator ceremony. We even brought our mattresses up on deck when it got too hot below to sleep. This was great fun – like camping under the stars and in the middle of the ocean.

Sailing through the Suez Canal our ship broke down and we would throw coins into the canal and Egyptian kids would dive in to catch them before they reached the bottom. Adults would barter for goods pulled up on ropes to the decks from the small trading boats. Life was so very exciting and the sky so blue and sunlight so bright and warm. So very different from home. And we had our first exotic fruit sitting on the floor of our cabin with a towel around us …a big sweet juicy pineapple – the first one I had ever seen.

In Ceylon we were picked up by a kind British lady who drove us around the city showing us the sights and invited us back to her apartment for afternoon tea but not before we had a toilet stop at a local school for my brother and I. We met the headmaster who was very obliging and I was introduced to an Asian style toilet for the first time

And so came our arrival in Australia.

Sailing into view off the Western Australian coast we were met by a pod of whales travelling north to their breeding grounds. Another first.

In Melbourne we were met by a welcoming familiar face, my Da’s brother and Nan’s youngest son Harry, now married with a new baby and living in Tasmania.

Nan went to live there for a few months but soon moved up to Queensland where her two younger sisters had settled after marrying two Aussie soldiers in Ireland after WW1.

Before we knew it we were on a train inside Station Pier with hundreds of others bound for Albury and the Bonegilla Migrant Hostel for one week, then down again to the Ballarat Hostel in Wendouree.

These two train journeys seemed endless to us kids. I remember Mum telling us to keep looking out of the window because we were sure to see a kangaroo or two hoping by. We never did of course.

I’m sure these train journeys would have given my parents an idea at how vast and unpopulated Victoria alone was in those days.

There was one image though that I saw that has stayed with me to this day. It was of a two story house surrounded by bush seemingly in the middle of nowhere with iron lace work all around the verandas. And on the top storey there was a woman, with the longest hair leaning over the balcony brush drying her dark wavy locks in the oh so bright and warm sun – something we would never do back home especially with the Irish mania for the “curse of the damp.”

And so we had arrived in our first home in Australia –“the place where you could fry eggs on the street it is so hot” according to the Australia House stories. Well on our first night in our Nissan hut it snowed for the first time in Ballarat for 13 years and we only had a two bar radiator that had to be switched off when lights were out.
But Mum and Dad both got jobs within a fortnight. Mum in the Hostel Canteen and Dad with a fencing gang working in the bush, sleeping in tents in the middle of winter.

And John and I were settled into school – at least I was. It was John’s first year and he found the separation hard. He would hide in the men’s toilets hoping he would miss the bus. It only worked once.

The nuns were very kind to us giving us all our uniforms and shoes. The school was named after another Irish exile St. Colomba.

Within six months we were living on our own block of land in Belmont in a caravan or ‘charabang’ as my Nan called it (which I believe is Irish for a hearst) then in a sleep out (garage) and then the big day arrived – the first spade in the foundations for our new house was dug in between the profiles.

A mammoth task ahead.

No car to start off with.
No mortgage ever.
No experience.

All work done by Mum and Dad after work and on weekends even making their own roof tiles, twelve each evening, with a hand machine passed around between fellow migrants in the area.

It took a long, long time but it became a lovely home for us all and more beautiful today as my family live there now with renovations and extensions.

Both my brother and I were given the best of educations and we were given every support for whatever career we wanted to pursue.

A success story for sure.
But it did come at a heavy price.

Mum for those first few years was extremely homesick and letters in those days took much longer than today.

My Dad was a driven man to provide a home debt free and to give us the gift of the education he never had all through the hardship of recessions and unemployment in the building industry when jobs came to an end.

They both sacrificed their lives so their children and their children’s children wouldn’t have that relentless uncertainty of how to survive from day to day …. a very soul destroying way of living that made them migrate to this wonderful country.

Dad died in 1972 as a result of a car accident but he did live to see and give horsey rides to his first grandchild Jeffrey and along with Mum to never miss an AFL game where his son John played full back for the Great Geelong Footy Club.

He lived in Australia for only 20 years – so hard to believe when he had accomplished so very much in such a short period of time.

Mum lived on for another 23 years – long enough to go back “home” to see her family and best friend of nearly 60 years and many wartime pals… and of course never seeing her Mum who died in 1980.

I guess many of us wish our parents could come back even for a day.

Mine would be so proud of their Children and grandchildren. I’m sure they would be so happy to see what has become of their original home and I’m certain they would have made their “come back” on a Saturday to watch their grandson Matthew play full back for the “Great Geelong Cats”. 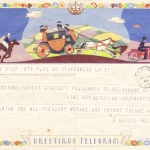 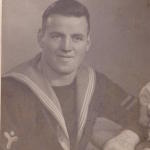 < Back to the Stories