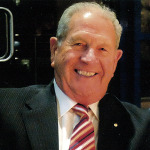 General O’Donnell is the Chairman of the Board of Immigration Place Australia. Lawrence (Laurie) has dedicated his life to the service of his country. Born in Quairading, Western Australia he graduated from the Royal Military College, Duntroon in 1954, where he was awarded the Queen’s Medal, and was commissioned in the Royal Australian Armoured Corps.

His long and remarkable career serving Australia has been characterised by excellence in many fields. General O’Donnell has held distinguished roles within the armed forces and defence industry. He was promoted to Lieutenant General and appointed Chief of the General Staff in 1987, relinquishing that appointment in 1990.

General O’Donnell continues to live generously as the member of a number of clubs and committees and he has made a deep commitment to the realisation of Immigration Place.